Lump or Lumpia are nicknames I’ve taken to calling Nukaat. Lump from a song of the same name by the Presidents of The United States of America that I now can’t get out of my head. Lumpia being his Filipino variation. A lumpia is a Filipino spring roll, served either fresh, somewhat similar to a Vietnamese salad roll but covered in sauce, or, more commonly, deep fried. 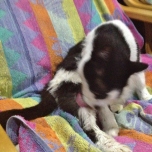 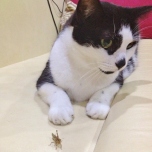 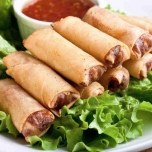 December 3, 2014: It started out like most evenings on MOKEN. We fed Lump promptly at five. He had set up camp near his dish an hour earlier, but he doesn’t become truly insistent about his dinner until the golden hour, when the sun’s fading light briefly floods the marina and the surrounding yachts in that certain otherworldly glow that is one of the highlights of the day. We fed ourselves a couple of hours later, well after darkness had settled in around us.

That evening, we had just opened a bottle of red wine when Lump decided to go on the prowl. It had taken him the better part of his first year on board to feel comfortable jumping the three or four feet from the deck to the dock and back again, but once he ventured out into the bigger world, there was no looking back.

He obviously got a thrill from these escapades under the cover of darkness, but only once the dock boys were safely tucked away inside their bosses’ boats watching TV. There are tiny scurrying crabs in the cracks of the dock and small fish that splash in the water just out of reach. It had become a regular nightly occurrence, sometimes requiring us to scour the docks late at night enticing Lump to return home by shaking a bag of his favourite treats. Once we found him tucked under a dinghy, people watching. Another time he’d made it all the way to land and was hiding in the bushes by the pool. More than once, we had been embarrassed when he came galloping towards us along the deck of a neighbouring yacht. I can only imagine the suspicious paw prints spotted in the morning light, like the ones from your neighbour’s cat that you find on the hood of your car in the morning when it’s time to go to work. You know the ones I mean.

Lump had misjudged the distance from the boat to the dock on more than one occasion already, showing up dripping wet and crestfallen. The marina water is less than sanitary and these swims usually mean a visit to the vet for a good scrub to ward off skin irritation. (When the boat boys get in the water to scrub the bottom of a boat or retrieve items that have fallen overboard, they have a good soapy shower on the dock right afterwards. For good reason.) The second dousing put an end to his nightly wanderings for a time, but he was obviously feeling much more adventurous again.

The bottle of wine wasn’t half empty when Lump came scurrying back on board, drenched and dripping big puddles of water everywhere he went. Despite our attempts to corral him, his squirmed and squirted his way around the salon, the galley and the master stateroom, jumping up onto counters and getting everything covered in seriously disgusting, salt water as he tried his best to outmaneuver us. To say he was not a happy cat was the understatement of the year. He was miserable. Woebegone even.

We finally managed to snag him, wrap him in a towel and rub his fur to the best of our ability with damp cloths. Another bath at this time would have just been too insulting. That could wait for a trip to the vet the next day.

Chris went out to “follow” his water trail back to the source. Turns out, Lump had been on a neighbouring boat and once again had misjudged the distance to the dock. Was he chasing something? Was he being chased? Or did he just slip? We’ll never know for sure.

With a cat on board, one of our biggest fears is that Lump will fall overboard unbeknownst to us and not be able to get himself out of the water. We’ve heard of people dangling pieces of rope or carpet overboard to give their cats something to get their claws into and it’s something we keep meaning to do. A good intention but it would not have helped in this situation because Nukaat was nowhere near MOKEN when the dunking occurred. We’re just relieved that he figured something out. His claws were in pretty rough shape until his grooming session the next day put them right again.

Lump hasn’t ventured out, unaccompanied, since. It makes me sad to realize that his world has shrunk to the inside of MOKEN, but I’m hopeful he will explore “out there” again in time. At least the moths and the occasional cricket on board continue to give him some of the pleasures of the hunt.

2 responses to “Lump Goes for a Swim”